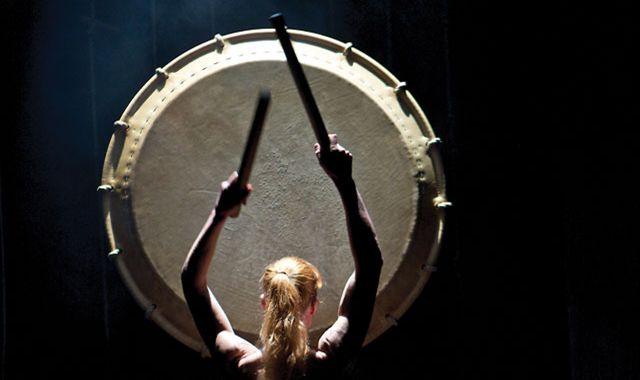 "Mugenkyo perform Taiko with manifest skill and awesome relentless energy. Having learned the ancient drumming techniques from Japanese master Kurumaya [Mugenkyo] showcases its musical presentation in totally modern style, making the esoteric thoroughly pop. Splendidly exploiting the theatrical potential of their intenesely forceful drumming and mesmeric heat of the rhythm, they leap from drum to drum, dance around them with mini cymbals and handbells, and strike vivid gestures with choreographed force... Mugenkyo sustains its appeal right to the climax, winning thunderous applause."

"If there ever was a musical incarnation of raw physical power, Taiko drumming has to be it. Mugenkyo have brought their energetic Taiko performance to Edinburgh, receiving whoops of joy from its audiences. Taiko drumming is as much a physical spectacle as an aural one; the drummers use calculated, disciplined movements... Your whole body begins to reverberate as the soft patter of raindrops grows into a deep rumble. Just when you think it could not get any more powerful, it doubles in intensity. This show is not one to be missed."

"This latest show is something else. It is, unashamedly, drumming as theatre, but also drumming as an almost religious experience... exhilarating to behold. Even if you've seen them before, you'll be gobsmacked."

"To play this music, you need to be seriously dedicated, not just to its musical disciplines but absolutely physically fit. This is not music for wimps. A tour de force of both music and stamina... If the tour bus is parked in your neighbourhood my advice is go to the gig and don't take the cotton wool."

"The members of Mugenkyo, Europe's only professional Taiko drumming group, perform with what seems an unlikely combination of reckless abandon and metronome-like precision. Armed with wooden sticks, they whack their drums - which range from small, bowl-sized instruments to others the size of boulders - in a combination of synchronised movements reminiscent of tai chi. But there is nothing tai chi-like about the sound: a heady, relentless and rigid beat over which complex counter-rhythms are steadily added. From a soft pitter-pattering evocative of a slight rainfall to a thundering, eardrum-bursting shudder loud enough to wake the gods, these musicans display a remarkable control, with not a beat out of place anywhere."

"In the hands of Mugenkyo, Japanese taiko drumming becomes a totality, taking in everything from music to performance... Rules were made to be broken, and Mugenkyo do it with panache... with their costumes and startling choreography"