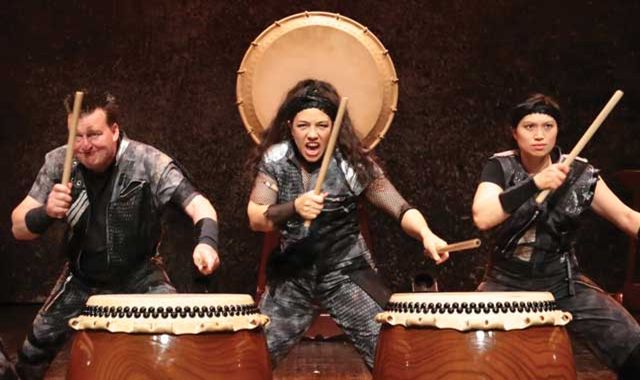 Mugenkyo Taiko Drummers are the UK's longest established taiko ensemble, and Europe's only professional touring company of this thrilling & energetic performing art. With over 1,000 performances across the UK, Japan & Europe over the last decade, Mugenkyo have established a solid reputation for their gritty passionate style, setting themselves firmly at the forefront of Taiko drumming on this continent through their rigorous touring.

Mugenkyo present taiko as a modern & theatrical performing art, with precise choreography, dramatic lighting, and a variety of costumes ranging from the post-apocalyptic industrial to gorgeous earthy silks. The concert is extremely diverse: powerful rhythms on an array of instruments from small hand-held drums to the thunderous reverberations of the huge Odaiko big drum, delicate bamboo flute, soulful voice, layers of percussive soundscapes, and innovative dance tightly integrated with the taiko drums.

Mugenkyo forge a new musical path, developing the genre in new directions with both their own concert performance & their wide-ranging artistic collaborations, truly living up to their name "limitless reverberation".